So Tranzfuser 2017 is well underway and the three teams based at the South Wales Hub here at the University of South Wales in Cardiff have bee making great progress so we thought we should share it with you!

Team Mochi Software with Moo Moo Move a mobile game where the player herds chubby cows to safety! A giggle-inducing game with elements of sim and strategy.

Team Filthy Fresh with Jeff’s Tower a VR tower defense game, where the player is in the tower, unleashing magical spells to shoot down incoming hordes of enemies of the evil king’s army. Protect the runestone, protect the world.

Team Dark Planet Studio with Stellarmania a space strategy game where  the player will take on the role of the director of a company looking to expand its exploits into deep space – be it through piracy, escort duty, financial marketing or technological prowess.

The University of South Wales (USW) is to be the South Wales regional hub again in 2017 for the innovative talent development programme. Organised by UK Games Talent and Finance CIC, and funded by the UK Government.

Designed to provide a platform for creative leaders of the future, Tranzfuser is aimed at graduates looking to break into the games development industry, with a strong focus on getting their game to market.

Last year Tranzfuser 2016, the first iteration of the annual competition, saw 18 teams from across the UK work with a £5,000 prize to develop their game.

The competition ended with the teams showcasing their projects at the EGX video games festival in Birmingham, attended by more than 75,000 gamers. During the show, a team of industry judges shortlisted the best games to compete for grants from £10,000 to £25,000 from the UK Games Fund to develop commercial prototypes.

Lead applicants to Tranzfuser 2017 have an opportunity to project manage the teams that they form for the Tranzfuser journey and win funds from the UK Games Fund.

Successful applicants will be invited to develop their ideas into working prototypes over the summer in a competition that culminates in a nationally recognized showcase event.

Participants will have access to Local Hubs and leading industry support where possible, providing the best knowledge-base and resources available across the UK.

Graduates are invited to apply as individuals looking to build their own team or individuals on behalf of their team.

Successful applicants will be awarded a £5,000 budget to allocate as they choose throughout the competition. At the showcase event in September, selected teams will be invited to pitch for follow-on funding of up to £25k from the UK Games Fund to commercialise their game and launch a company.

Richard Hurford, Course Leader for Computer Games Enterprise at USW, said: “We are delighted that USW has again been chosen as the regional hub for Tranzfuser, and we’re excited to be mentoring and supporting the teams through the process.

“USW is all about giving students the skills to go out into the world and make a success of their ideas, and this is a great competition to gain further experience and potentially have access to vital funding.

“Those involved will be exposed to a range of industry specialists who can provide priceless advice and guidance. It is a fantastic opportunity for recent graduates from a range of disciplines to get involved in the games industry. We are looking forward to welcoming the 2017 teams and seeing a new set of great idea being turning into a reality.”

Deborah Farley, Head of Talent and Outreach at UK Games Talent and Finance CIC says, “Tranzfuser 2016 exceeded everyone’s expectations; from the calibre of the teams participating, contribution and involvement from the Local Hubs to the showcase event at EGX.

“We were delighted to go on a see six of the teams receive UK Games Fund grant funding and to continue our support of them.  This year we will be building on this success with more opportunities for teams to get involved, continued support during the competition and a showcase event to remember. This is a fabulous opportunity for any graduates looking to break into the UK Games Industry, don’t miss out!”

Applications for 2017 close on Monday 27th February at noon. http://tranzfuser.com/apply-now/

More information can be found on the GameCity website.

Below is an image from Karl’s competition entry.

Once again this year Newport (with huge effort from Mike Reddy) hosted a regional Global Game Jam event. This yeartThe theme for this was “Extinction”, but there were also a series of optional achievements.

Here are some of the great games produced…

You play as a lost moose trapped between two conflicting worlds. The player must reach the Great Spirit moose in the sky whilst keeping track of both platforms and enemies in the different worlds. The game is loosely based on ‘Visual Extinction’ which is a neurological disorder characterised by severe impairment in identifying two or more visual stimuli displayed briefly at the same time. 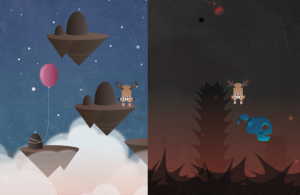 You play as the last Quagga, a now extinct animal that looks like half zebra half horse. As you run forwards you need to stop half in the shadows to become invisible and no longer vulnerable to the predators. A simple single button game that requires timing based skill.

The bunnies are multiplying and it is down to you Lava Penguin to stop then by any means necessary.

Vol is a four-player, team vs team game played on a single keyboard. Using a simple two key mechanism to move, attack and defend, players either repel or attract lifeforms into on-screen hazards. Wipeout the competition, protect your species. 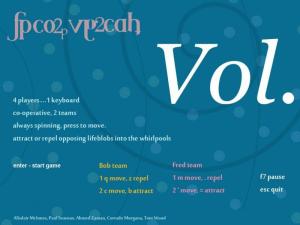 You play as a broken Hero, who couldn’t beat the Final Boss of his game, which in turn ended up killing every human being on the planet, with the exception of you. You had managed to eventually kill the Final Boss, but everyone was already dead, so you; The “Hero”, are the last remaining human being on Earth, forced to live out the remainder of his existence in solitude in your retirement log cabin in the forest.